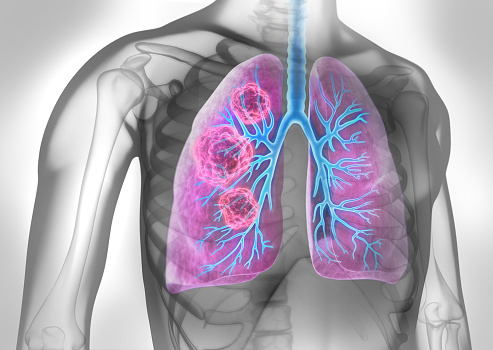 Abnormal cell growth in either one or both of the lungs is the simple answer to the question, "What is lung cancer?" In healthy individuals, the cells within the lungs go about their business duplicating at a normal rate and turning into more and more lung tissues. The lungs continue to function properly and all is well.

But in damaged lungs, this rate of cell duplication becomes uncharacteristically fast yet new lung tissue fails to develop. These damaged (cancerous) cells begin to clump together and ultimately turn into cancerous tumors. Eventually, the tumors begin to interfere with the impacted lung's ability to function normally and that is when the full impact of the disease known as lung cancer begins to be noticed.

Interestingly, although it usually takes many years for lung cancer to develop, the cells begin to take on abnormal characteristics almost immediately upon being exposed to cigarette smoke or the other environmental contaminants that can cause trouble in the lungs such as radon, asbestos, coal, air pollution, and even second-hand smoke.

Lung cancer can strike anyone regardless of gender, age or race. Even though it is more likely to strike those who are or who have been a smoker, lung cancer can develop in those who have never taken up this habit. Lung cancer in non-smokers is very rare, occurring in only about 10% of the cases, meaning that in almost 90% of the lung cancer cases, cigarette smoking is the instigator. Why is that so?

The primary purpose of the lungs is to breathe in air. The lungs remove the oxygen from this air and push it out into the blood where it can travel around the body as needed. Because the air we breathe is not always pure.  it's filled with dust, dirt, and other types of pollutants, the upper part of the lung system was designed to clean it before allowing it to enter deeper into the lungs. In the case of smokers, the carcinogens in cigarette smoke can break down the lung's cleansing capabilities and as a result, dirty air and the contaminants within cigarette smoke continue to freely enter into the lungs. It is the absence of this cleansing capability that ultimately causes the cells inside the lungs to function abnormally.

Besides being the #1 cause of cancer death in the United States, lung cancer is unfortunately so far a disease that has no cure. In fact, by the time lung cancer is discovered, few people will survive the first year after diagnosis.