What Is Vitiligo And Often Called As Leucoderma? 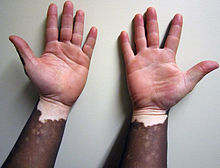 Vitiligo (often called as leucoderma) is a disorder where the skin loses its color in patches of irregular shapes and sizes. This is a pigmentation disorder which means that melanocytes (the pigment-producing cells) in the skin get destroyed. This results in the development of white patches on the skin. The hairs which are growing in that area may lose their color and turn grey.

The cause for vitiligo is not very clear, but doctors and researchers are beginning to believe that vitiligo resembles an autoimmune disorder. Which means that the pigment (the matter that gives colour to our skin) producing cells of the skin are destroyed by the body's own antibodies (defense cells). In some cases, it has been observed that the onset of vitiligo is related to a psychologically stressful event in the patient's life. People with a family history of vitiligo are more prone to developing these white patches. Ninety-five per cent of all those who develop vitiligo start developing symptoms before the 40th year of their life.

People with vitiligo develop white patches on their skin of irregular shapes and sizes. Vitiligo is more common on the exposed areas, for example, hands, face, neck and arms. It also occurs on covered areas too like genitals, breast and legs. In some patients, the hair may also turn grey early and in the inside of the mouth, white discoloration may occur.

The spread of vitiligo cannot be determined. It may stop completely after the first patch, but often these patches do spread. For some patients, further development may take years and for others the large areas can be covered in months. In some patients, mental stress has been seen to increase the growth of these white patches.

According to homoeopathic philosophy, vitiligo is not a disease in itself but an expression of an inner disturbed state of the body. Thus, the cure should occur at a level where things have gone wrong. In order to achieve this, the problem is analyzed keeping in view various aspects of mental, physical and familial attributes, and also a complete study is done on the psychological environment of the patient. The prescription is then based at the deepest level of understanding of the patient's disturbed inner force.

Although many homoeopathic medicines like Arsenic Sulph Falvus, Arsenic Album, Baryta Mur and Baryta Carb are known to give good results in vitiligo, the fact is that the real cure of vitiligo occurs when the prescription is made according to the true principles of homoeopathic philosophy - treating that "deep causative factor behind this inner disturbance." Also remember that vitiligo is a chronic disorder and can take considerable time, even with the best of the homoeopathic treatment, to be completely cured.